In the new issue, our scientific journal offers you nine scientific articles. As always, we try to offer a wide variety of topics and areas and follow current trends in the history of science and technology.

The issue of the journal opens with an article dedicated to the formation and development of natural history museology in Europe in the 15th–19th centuries. The development of scientific knowledge at that time affects the idea of the world order and the place of man in it, and the combination of knowledge with practical experience leads to the birth of true science. It is shown that one of the most important components of the development of natural sciences, in particular biological sciences, was the collection of naturalia (i.e. objects of natural origin), the rapid surge of interest in which contributed to the Great Geographical Discoveries. In chronological order, the further historical development of museum work from private collections in Italy to the formation of a prototype of a genuine museum, which performs the main museum functions such as amassment, storage and demonstration of collections, is considered.

The article by Leonid Griffen and co-authors considers the object and subject of the history of science and technology, its place in the system of sciences. Today, more and more people are turning to the factors that determine the interaction of the society with the environment (productive forces of the society), to study which in the historical aspect and called a special scientific discipline the history of science and technology. The composition and development of the technosphere and noosphere are considered in the article. It is shown that the functioning of the technosphere is based on its interaction with the noosphere, which provides information about the environment and controls the effectiveness of interaction with it. It is formed by combining the mental structures of individuals through sign systems. The production process that ensures the functioning of the society begins with the noosphere, which through individual consciousness controls the actions of each individual, who through the means of production (technosphere) interacts with the natural environment. However, the gradual development of productive forces leads at some point to the fact that the information needed by the individual to perform all necessary actions for the benefit of the society, ceases to fit in his individual consciousness. As a result, there is a new social phenomenon the social division of labor. The cardinal solution to the problem is the prospect of humanity entering infinite space.

The article by Jun-Young Oh and Hyesook Han is devoted to the study of what Understanding mathematical abstraction in the formularization of Galileo's law. Galileo's revolution in science introduced an analytical method to science that typifies the overall modern thinking of extracting, abstracting, and grasping only critical aspects of the target phenomena and focusing on “how”, which is a quantitative relationship between variables, instead of “why”. For example, to him, the question of 'why does an object fall' is of no significance; instead, only the quantitative relationship between distance from the falling object and time is important. Yet, the most fundamental aspect of his idea is that he introduced a quantified time t. Because, according to atomic theory, vacuum exists between an atom and an object composed of atoms or between objects – ignoring factors that interfere with motion, such as friction – the space for absolute time, which is a mathematical time, can be geometrically defined. In order to justify this mathematical abstraction strategy, thought experiments were conducted rather than laboratory experiments, which at that time were difficult to perform.

The article by Vasyl Andriiashko and co-authors provides a thorough overview of the evolutionary process of the emergence, establishment, and development of the Kyiv school of artistic textiles. It reveals the influence of various factors (ideological, political, economic, and aesthetic) on this process. The historical and factual method allowed us to study socio-economic, as well as historical and cultural factors that contributed to the emergence, establishment, and development of the Kyiv textile school in a chronological sequence. It is established that the very fact of emergence of the Kyiv school of artistic textile, as a community of style, unity of forms, preservation, and continuity of traditions, had unbiased backgrounds since Ukrainian decorative weaving, a part of which is Kyiv weaving, inherited the abundant artistic traditions that were created over the centuries and most vividly manifested through the art of Kyivan Rus.

In the next article, the authors Artemii Bernatskyi and Mykola Sokolovskyi is devoted to the study history of military laser technology development in military applications. For better understanding and systematization of knowledge about development of historical applications in the military field, an analysis of publicly known knowledge about their historical applications in the leading world countries was conducted. The study focuses on development that was carried out by the superpowers of the Cold War and the present era, namely the United States, the Soviet Union and the Peoples Republic of China, and were built in metal. Multiple avenues of various applications of laser technology in military applications were studied, namely: military laser rangefinders; ground and aviation target designators; precision ammunition guidance systems; non-lethal anti-personnel systems; systems, designed to disable optoelectronics of military vehicles; as well as strategic and tactical anti-air and missile defense systems.  The issues of ethical use of laser weapons and the risks of their use in armed conflicts, which led to an international consensus in the form of conventions of the United Nations and the International Committee of the Red Cross, were also considered. As a result of the analysis, a systematic approach to the classification of applications of laser technology in military products by three main areas of development was proposed: ancillary applications, non-lethal direct action on the human body and optical devices of military equipment, and anti-aircraft and anti-missile defensive systems.

The author of the following article considered the front line transporter as the embodiment of the USSR military doctrine in the middle of the 20th century. The paper based on a source analysis of the history of creation, design, and production of LuAZ-967, LuAZ-967M, against the background of the processes of implementing projects of small tactical high mobility wheeled vehicles for the armies of European countries, shows that the developing, testing, and commissioning a front line transporter became a deepening of the process of motorization of the Soviet army. The designs of similar vehicles have been analyzed. An attempt to assess the degree of uniqueness of the front line transporter design and its place in the history of technology, as well as its potential as a reminder of science and technology has been made. An analysis of the front line transporter design, its systems, compared with its foreign counterparts, suggests that it is a Soviet refinement of the concept of a small army vehicle, a more specific means directly for the battlefield. At the same time, it was developed taking into account foreign developments and similar designs, imitating individual designs, adapting to the capabilities of the USSR automotive industry.

The next article is devoted to the study, generalization and systematization of scientific knowledge about the history of the establishment, development and operation of the regional railway system in Bukovyna in the second half of XIX – early XX centuries. The authors attempted to analyze the process of creation and operation of railways in Bukovyna during the reign of the Austro-Hungarian Empire based on a wide range of previously unpublished archival documents, periodicals, statistical literature and memoirs. The article studies the development of organizational bases for the construction of railways, the activity of the communication network management, lists a whole range of requirements and tasks set for railway transport in Bukovyna, the progress of their implementation, considers successes and difficulties in this work.

The purpose of the article by authors Sana Simou, Khadija Baba and Abderrahman Nounah is to reveal, recreate  as accurately as possible the characteristics of an archaeological site or part of it.  The restoration and conservation of monuments and archaeological sites is a delicate operation. It requires fidelity, delicacy, precision and archaeological authenticity. Research during the last two decades has proved that 3D modeling, or the digital documentation and visualization of archaeological objects in 3D, is valuable for archaeological research. The study has opted for the technique of terrestrial and aerial photogrammetry by 3D surveys of architectural elements, to develop an archetype of the deteriorated Islamic Marinid site (a dynasty between the 13th and 15th centuries), and the Roman site (25 BC), located at the Chellah archaeological site in Rabat and Salé cities. The data acquired build an architectural database to archive and retrieve the entire existing architecture of monuments. This study has been completed by photogrammetrists, architects, and restorers.

The issue of the journal ends with an article devoted to the analyzing the prerequisites and conditions for the foundation of an aircraft engine enterprise in Ukraine. Based on the retrospective analysis, the prerequisites and conditions of the foundation of the aircraft engine enterprise in Aleksandrovsk, Ukraine, were considered. There was a severe gap between the Russian Empire and European countries in the development pace of the aviation industry during World War I. This prompted the Russian Empire to raise foreign capital, as well as attract technologies and specialists to develop aircraft engineering and other industries. By 1917, the plant had gained the status of Russia’s largest engine-building enterprise in terms of building area and one of the best in equipment. It is evident that the beginning of aircraft engine production in Aleksandrovsk relates to the establishment of a branch of Petrograd Joint Stock Company of Electromechanical Structures and the plant’s purchase from the Moznaim brothers.

We hope that everyone will find interesting useful information in the new issue. And, of course, we welcome your new submissions. 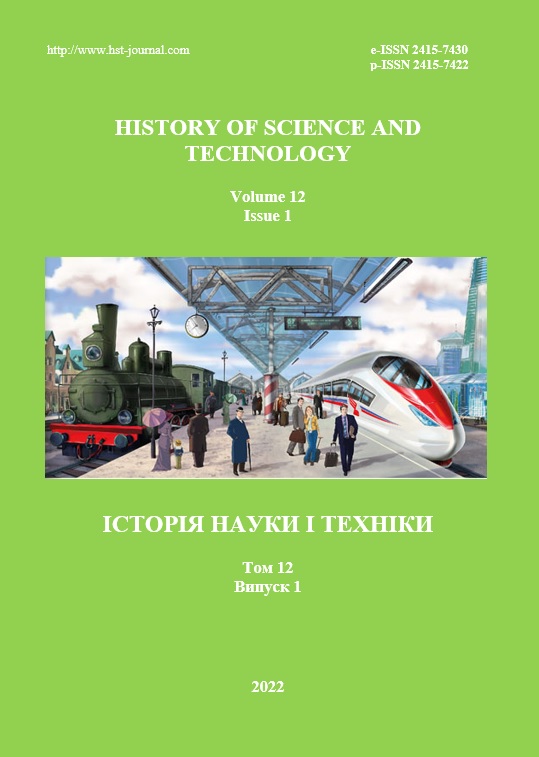