In the new issue, our scientific journal offers you thirteen scientific articles. As always, we try to offer a wide variety of topics and areas and follow current trends in the history of science and technology.

In the article by Olha Chumachenko, оn the basis of a wide base of sources, the article highlights and analyzes the development of research work of aircraft engine companies in Zaporizhzhia during the 1970s. The existence of a single system of functioning of the Zaporizhzhia production association “Motorobudivnyk” (now the Public Joint Stock Company “Motor Sich”) and the Zaporizhzhia Machine-Building Design Bureau “Progress” (now the State Enterprise “Ivchenko – Progress”) has been taken into account.

Leonid Griffen and Nadiia Ryzheva present their vision of the essence of technology as a socio-historical phenomenon. The article reveals the authors' vision of the essence of the technology as a sociohistorical phenomenon. It is based on the idea that technology is not only a set of technical devices but a segment of the general system – a society – located between a social medium and its natural surroundings in the form of a peculiar social technosphere, which simultaneously separates and connects them.

Definitely the article by Denis Kislov, which examines the period from the end of the XVII century to the beginning of the XIX century, is also of interest, when on the basis of deep philosophical concepts, a new vision of the development of statehood and human values raised. At this time, a certain re-thinking of the management and communication ideas of Antiquity and the Renaissance took place, which outlined the main promising trends in the statehood evolution, which to one degree or another were embodied in practice in the 19th and 20th centuries. A systematic approach and a comparative analysis of the causes and consequences of those years’ achievements for the present and the immediate future of the 21st century served as the methodological basis for a comprehensive review of the studies of that period.

The article by Serhii Paliienko is devoted to an exploration of archaeological theory issues at the Institute of archaeology AS UkrSSR in the 1960s. This period is one of the worst studied in the history of Soviet archaeology. But it was the time when in the USSR archaeological researches reached the summit, quantitative methods and methods of natural sciences were applied and interest in theoretical issues had grown in archaeology. Now there are a lot of publications dedicated to theoretical discussions between archaeologists from Leningrad but the same researches about Kyiv scholars are still unknown

The legacy of St. Luke in medical science, authors from Greece - this study aims to highlight key elements of the life of Valentyn Feliksovych Voino-Yasenetskyi and his scientific contribution to medicine.

Among the scientists of European greatness, who at the turn of the XIX and XX centuries showed interest to the folklore of Galicia (Halychyna) and Galician Ukrainians, contributed to their national and cultural revival, one of the leading places is occupied by the outstanding Ukrainian scientist Ivan Verkhratskyi. He was both naturalist and philologist, as well as folklorist and ethnographer, organizer of scientific work, publisher and popularizer of Ukrainian literature, translator, publicist and famous public figure. I. H. Verkhratskyi was also an outstanding researcher of plants and animals of Eastern Galicia, a connoisseur of insects, especially butterflies, the author of the first school textbooks on natural science written in Ukrainian.

A new emerging field that has seen the application of the drone technology is the healthcare sector. Over the years, the health sector has increasingly relied on the device for timely transportation of essential articles across the globe. Since its introduction in health, scholars have attempted to address the impact of drones on healthcare across Africa and the world at large. Among other things, it has been reported by scholars that the device has the ability to overcome the menace of weather constraints, inadequate personnel and inaccessible roads within the healthcare sector. This notwithstanding, data on drones and drone application in Ghana and her healthcare sector in particular appears to be little within the drone literature. Also, little attempt has been made by scholars to highlight the use of drones in African countries. By using a narrative review approach, the current study attempts to address the gap above. By this approach, a thorough literature search was performed to locate and assess scientific materials involving the application of drones in the military field and in the medical systems of Africans and Ghanaians in particular.

The paper by Artemii Bernatskyi and Vladyslav Khaskin is devoted to the analysis of the history of the laser creation as one of the greatest technical inventions of the 20th century. This paper focuses on establishing a relation between the periodization of the stages of creation and implementation of certain types of lasers, with their influence on the invention of certain types of equipment and industrial technologies for processing the materials, the development of certain branches of the economy, and scientific-technological progress as a whole. The paper discusses the stages of: invention of the first laser; creation of the first commercial lasers; development of the first applications of lasers in industrial technologies for processing the materials. Special attention is paid to the “patent wars” that accompanied different stages of the creation of lasers. A comparative analysis of the market development for laser technology from the stage of creation to the present has been carried out.

Nineteenth-century world exhibitions were platforms to demonstrate technical and technological changes that witnessed the modernization and industrialization of the world. World exhibitions have contributed to the promotion of new inventions and the popularization of already known, as well as the emergence of art objects of world importance. One of the most important world events at the turn of the century was the 1900 World's Fair in Paris. Thus, the author has tried to analyze the participation of representatives of the sugar industry in the World's Fair in 1900 and to define the role of exhibitions as indicators of economic development, to show the importance and influence of private entrepreneurs, especially from Ukraine, on the sugar industry and international contacts.

The article by Viktor Verhunov highlights the life and creative path of the outstanding domestic scientist, theorist, methodologist and practitioner of agricultural engineering K. G. Schindler, associated with the formation of agricultural mechanics in Ukraine. The methodological foundation of the research is the principles of historicism, scientific nature and objectivity in reproducing the phenomena of the past based on the complex use of general scientific, special, interdisciplinary methods. For the first time a number of documents from Russian and Ukrainian archives, which reflect some facts of the professional biography of the scientist, were introduced into scientific circulation.

The authors from Kremenchuk National University named after Mykhailo Ostrohradskyi presented a fascinating study of a bayonet fragment with severe damages of metal found in the city Kremenchuk (Ukraine) in one of the canals on the outskirts of the city, near the Dnipro River. Theoretical research to study blade weapons of the World War I period and the typology of the bayonets of that period, which made it possible to put forward an assumption about the possible identification of the object as a modified bayonet to the Mauser rifle has been carried out. Metal science expert examination was based on X-ray fluorescence spectrometry to determine the concentration of elements in the sample from the cleaned part of the blade.

In the article by Mykola Ruban and Vadym Ponomarenko on the basis of the complex analysis of sources and scientific literature the attempt to investigate historical circumstances of development and construction of shunting electric locomotives at the Dnipropetrovsk electric locomotive plant has been made.

The next scientific article continues the series of publications devoted to the assessment of activities of the heads of the Ministry of Railways of the Russian Empire. In this article, the authors have attempted to systematize and analyze historical data on the activities of Klavdii Semyonovych Nemeshaev as the Minister of Railways of the Russian Empire. The article also assesses the development and construction of railway network in the Russian Empire during Nemeshaev's office, in particular, of the Amur Line and Moscow Encircle Railway, as well as the increase in the capacity of the Trans-Siberian Railway. The article discusses K. S. Nemeshaev's contribution to the development of technology and the introduction of a new type of freight steam locomotive for state-owned railways.

We hope that everyone will find interesting useful information in the new issue. And, of course, we welcome your new submissions. 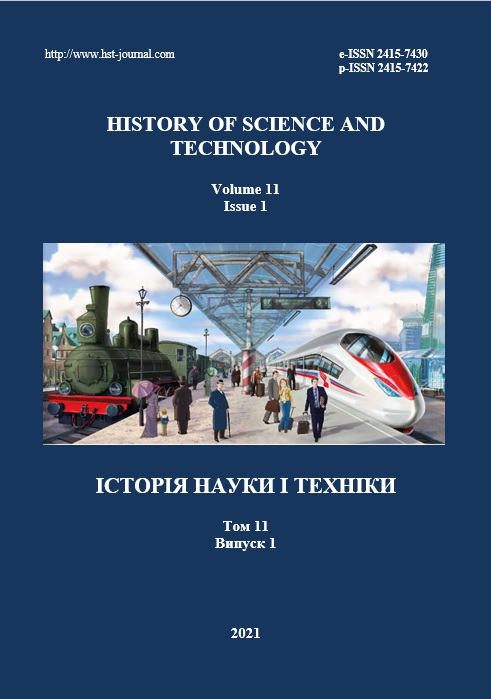